I haven’t posted a review in a couple of weeks so I decided to do one on a cigar that I’ve been looking forward to for a while: the Litto Gomez Diez Small Batch No. 4 Oscuro. Now, of course, this doesn’t mean this is going to be a great cigar, it might, but it’s just one of those that has piqued my interest mainly because my favorite cigar is a LGD 2012 Chisel. I know it has a different flavor profile than the normal LGD cigars, I smoked one prior to this review, but that isn’t necessarily a bad thing.

This cigar is seven inches long, which is a bit longer than I normally smoke, but that’s fine. Very dark wrapper but still brown. More of a chocolate brown really and, if I were to break out the thesaurus, Roget could probably come up with a better description. Rough texture to the wrapper with a good amount of oils and not many veins. There is a small tear at the foot, which may have been my fault, but there are also three small slits about two inches from from the cap; hopefully this won’t cause any problems. 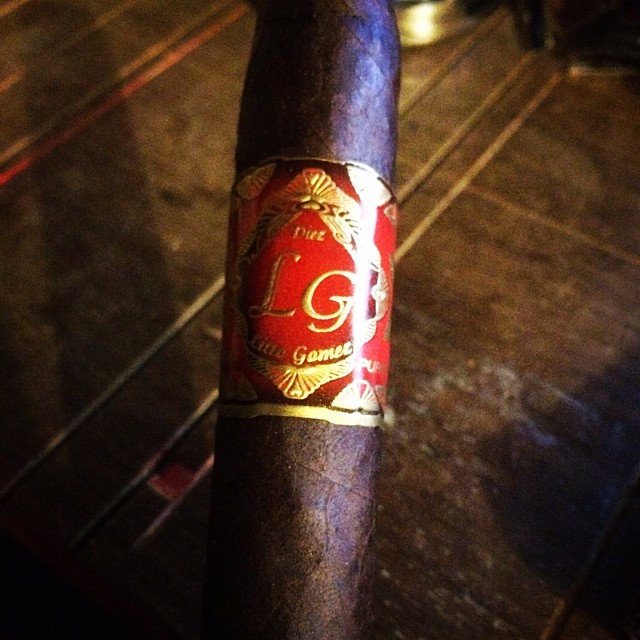 Cedar and bitter chocolate are the main flavors during the first third. There was a bit of fruitiness early on but it fades pretty quickly. The flavors are pretty strong and I’d peg this cigar as being medium bodied (strength of flavor doesn’t equate with the strength of the cigar – flavor and nicotine levels are two different things). I’m liking it but it’s definitely different than what I had originally expected.

There’s a definite chalkiness to the texture of the flavor profile that is now dominated by bitter chocolate. Unfortunately, that dominance is nearly overbearing and it basically drowns out every other flavor. There’s a bit of cedar still kicking around but it’s clinging on for dear life like one of those polar bears in the commercials about the climate.

A bit of saltiness comes on during the final third and, as is often the case with chocolate, it adds an extra dimension to the flavor profile that is enjoyable. The saltiness helps to cut the bitterness and allows the cedar to come through once again. It’s a decent end to a cigar that I had higher hopes for.

Medium bodied with a good draw and burn; the Litto Gomez Diez Small Batch No. 4 Oscuro is a decent cigar. Obviously, if not for the doldrums encountered during the middle third this would have been a better cigar but, even then, it wouldn’t be a great cigar in my book. It’s definitely different from the normal LGD’s and that wouldn’t be a bad thing if I liked the flavors present more.